Why should we save endangered species? 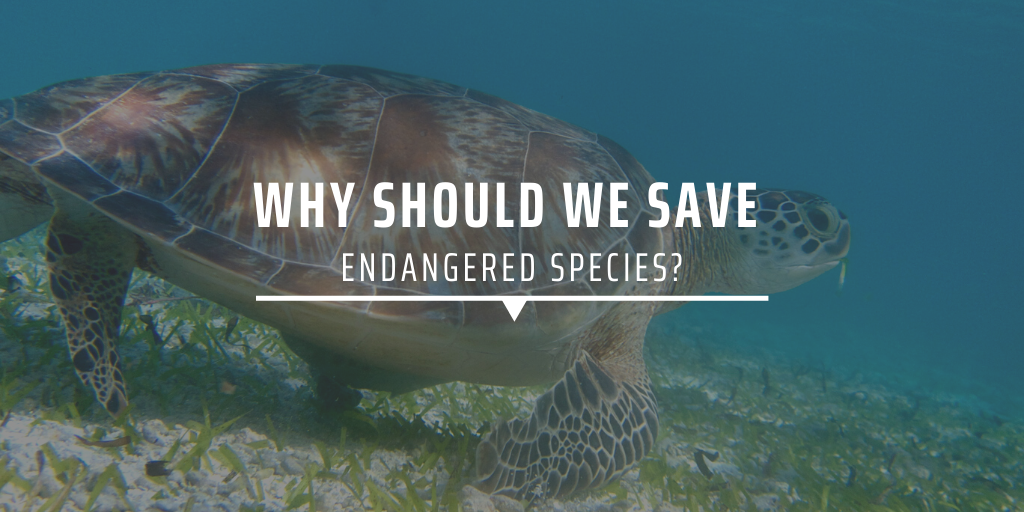 The images in this article were taken pre-COVID-19.

Plants and animals maintain the health of an ecosystem. When a species becomes endangered, it’s a sign that an ecosystem is out of balance. And the consequences can be critical.

Ecosystems are groups of plants and animals that are found in the same area and interact with each other. These interactions make up and maintain the environments we know today – like rainforests, mountains and savannahs.

But the balance within an ecosystem isn’t always easy to maintain; the loss of one species often triggers the loss of others.

This happened because elk populations, which are usually hunted by wolves, were able to graze freely and more heavily on the plants that were also needed by beavers to survive during winter.

The conservation of endangered species, and restoring balance to the world’s ecosystems, is vital for humans, too. Here’s how.

The benefits of conserving endangered species A well-balanced ecosystem maintains the health of the environment. This ensures that human beings have access to clean air and water, and fertile land for agriculture.

It goes without saying that clean air and water improves our quality of life, and fertile land for agriculture ensures that we can produce enough food for consumption. A balanced ecosystem also provides us with plants that have medicinal properties.

So, when ecosystems aren’t maintained, our health can be affected too. That’s why, when you add to the conservation of endangered species, you’re also contributing towards humans’ well-being.

How to contribute towards the conservation of endangered species Although there are many endangered species across the globe, there are also lots of efforts underway to conserve them.

Governments, non-profit organisations, international organisations, local communities, and individuals are working together to contribute towards growing the populations of endangered species.

They’re also building on awareness campaigns that are aimed at getting even more people involved in vital conservation work.

As an individual, you can make an impact by learning and raising awareness about endangered species in your area and across the world.

A sustainable way to do this is to get involved as a volunteer and partner with governments and organisations on existing conservation projects.

This is a great way to learn about wildlife conservation, and gain hands-on, professional field experience. These practical skills will boost your resume for a career in sustainable development. And if you have a different career in mind, you’ll still pick up other valuable skills like teamwork and leadership. So, joining one of our projects as a volunteer or intern will give you the chance to help maintain well-balanced ecosystems and conserve the animals that depend on them. You’ll learn more about conservation in a real-life context, and experience the challenges involved in conservation up close.

Here are some of the projects that you could get involved in to add to the conservation of endangered species with GVI.

Get involved in sea turtle conservation in Greece A GVI volunteer measures the shell of a turtle in Giannitsochori, Greece. Data collected from GVI conservation projects contributes to coastal management plans in Greece.

Six of the seven species of sea turtles are listed as vulnerable, endangered, or critically endangered on the International Union for Conservation of Nature’s (IUCN’s) Red List.

Well, sea turtles face many challenges to their survival, like ocean pollution. With so much waste polluting the ocean, turtles are at risk of eating or becoming tangled in litter like plastic bags.

Uncontrolled coastal development also has a negative impact on turtles because it limits their nesting grounds.

And, poaching activities that target turtle eggs, skins, shells and meat, also affect the number of sea turtles in the ocean. These are just a few of the common obstacles sea turtles face. We have to safeguard these animals because sea turtles play a fundamental role in marine ecosystems.

For example, by grazing on seagrass, turtles help keep it short, encouraging it to grow horizontally across the sea floor.

In this way, the seagrass can continue to provide support and protection for other marine life. It can also remove carbon dioxide from the atmosphere more efficiently, which is vital for regulating the earth’s atmosphere.

The Mediterranean Sea hosts thousands of loggerhead turtles during their nesting season. And the Greek shoreline serves as one of the largest loggerhead breeding grounds in the world.

No wonder turtle conservation is a hot topic in Greece. In fact, in the 1980s, a society named ARCHELON was established by a group of concerned citizens and scientists.

They were determined to safeguard the loggerhead turtle, and focused on the development of the shoreline, which had a negative impact on sea turtle habitats.

This organisation worked alongside the government to establish protective regulations that are still in place today.

And, by assisting in protecting nests against predation and flooding, GVI volunteers can contribute towards the survival of as many hatchlings as possible. GVI volunteers assist in dehorning a black rhino in Karongwe Private Game Reserve in Limpopo, South Africa. Dehorning takes place every two years and is essential in ensuring the protection of the critically endangered black rhino, which is poached for its horn.

Black rhinos in South Africa are listed as critically endangered according to the IUCN. The black rhino population has experienced a more than 90% decline in their numbers since 1970.

Today, few rhinos survive outside of national parks due to poaching and the destruction of their natural habitat.

Black rhinos are poached primarily for their horns. These horns are used in some traditional medicines or sold in illegal trade.

Rhinos are known as megaherbivores – very large animals that only eat plants. And, rhinos are considered a keystone species – a species that is important in maintaining the habitat they live in. Grazers, like rhinos, play a critical role in keeping the ecosystem balanced. Their grazing keeps grass short, and because they prefer to eat certain plants over others, they influence the types of plants that grow in an area, and how fast they grow.

As a volunteer on GVI’s anti-poaching project, you’ll learn about the conservation concerns in South Africa.

You’ll also get involved in activities that build on public awareness of these issues, and work alongside local partners to collect data on rhinos and other wildlife species.

Your work will include tracking wildlife, setting up camera traps and using radio telemetry equipment on research game drives.

Volunteer with Asian elephants in Thailand Volunteer with Asian elephants in Chiang Mai, Thailand, and contribute toward their reintroduction into the wild. Volunteers work in partnership with local elephant carers (mahouts) who draw on generations of local knowledge about elephants.

Asian elephants are listed as endangered by the IUCN. The decrease in their population size is largely due to elephant labour in the tourism industry, as well as deforestation of their habitats.

This is because, in Thailand, Asian elephants were historically used as part of the workforce, in the logging industry and the military, as well as for cultural celebrations.

And, even after they were no longer used in the workforce, Asian elephants were still seen as tourist attractions.

This meant that the elephants took part in activities like providing rides for tourists, or performing in circuses, that had a negative impact on their well-being. Like rhinos, elephants are also a keystone species. When they graze in the forest, they cover great stretches of ground and control the growth of vegetation. Elephants also spread the seeds of the plants they eat, which promotes plant growth and biodiversity.

As a volunteer on GVI’s Thailand elephant reintegration project in Chiang Mai, you’ll collect data on the behaviour and feeding patterns of elephants.

You’ll work alongside traditional elephant carers who have generations of knowledge on elephant behaviour and well-being.

During your time in Thailand, you’ll live with a local family, helping you to better understand how this community relies on these endangered animals. The cheetah is not yet endangered. Join one of GVI’s South African conservation programs and help to protect this big cat.

GVI’s conservation work also extends to animals that are not yet endangered, such as the cheetah and jaguar.

This is because all animals are affected by global warming and environmental challenges. So we’re keeping an eye on as many animal species as possible, and getting involved in their conservation as soon as we can.

Want to be at the forefront of conservation work across the world?

Check out GVI’s wildlife and marine conservation programs in Asia, Africa, Europe, Australasia and Latin America, and start adding to the conservation of endangered species today.

What is a digital detox and why is it a good idea?
Read More
Why are partnerships important for sustainable development projects?
Read More
Life on land: why safeguarding the environment is so important
Read More
Apply Now
Enquire Now
Call Back Request