Human beings are impressive. We have the ability to communicate, we are continually adapting, and we are mastering evolution. In the western world especially, we’ve constructed such comfortable, orderly lives for ourselves. We’ve invented vehicles for independent transportation, created the internet for quick browsing, and fashioned lots of small, daily luxuries like grabbing a filtered bottle of water before running out the door.

Over winter break I completed a Plastic Pollution and Coastal Conservation internship program in Thailand. The experience was priceless. I learned more in the field than I ever could sitting behind a desk in a classroom. I immersed myself into a culture different from what I was used to, a culture a bit slower and much simpler. I swam in clear oceans and sat under evening skies that were illuminated with colors more pigmented than I thought possible. 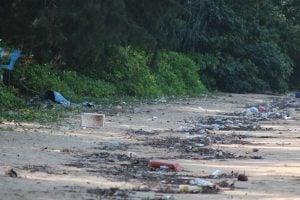 Despite spending each day in awe, I laid in bed each night feeling disheartened.

One of our major initiatives as volunteers was to clean the coastlines. We spent countless hours collecting and disposing of trash from beaches along the west, southern coast of Thailand. The amount of plastic was incomprehensible. It was daunting to see the copious amounts of plastic pollution that were destroying the beaches at the expense of ourselves, humans.

Not only did the plastic ruin the natural serenity, but it posed a severe threat to marine life too. I worked at the Royal Thai Navy Third Fleet Sea Turtle Rehabilitation Center where my team and I cared for injured green sea turtles. Before my trip, I’ve only seen images of sea turtles with plastic straws in their noses or plastic rings around their necks. In Thailand, I experienced it first-hand.

It goes without saying that plastic pollution is an issue, but in my opinion, the more pressing issue at hand is not actually about the plastic. The argument to discuss is determining the most effective way to resolve this crisis.

I often get questioned why I make an effort to switch to reusable bottles and bags when celebrities and companies cause more destruction than I, as one person, am capable of reversing.

It is true that celebrities and large corporations considerably contribute to the plastic pollution crisis, and therefore, governmental policy is likely to be the driving force behind a long-lasting solution. Nonetheless, others’ destruction does not dismiss one’s personal impact, and any stride toward conservation is of Earth’s benefit. 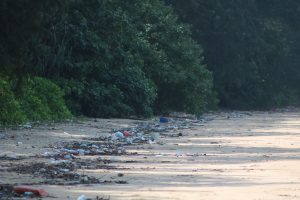 One of my favorite quotes by American author Edward Everett Hale is as follows, “I am only one, but I am one. I cannot do everything, but I can do something. And I will not let what I cannot do interfere with what I can do.”

It is easy to detach yourself and feel that as an individual, your contribution is minuscule, but there are seven billion other individuals in this world. If each person takes ownership and takes charge, change is inevitable.

To put this in perspective, in order to afford my trip to Thailand, I needed to increase my income. I decided to begin my own recycling initiative. I partnered with a few local families to collect their recyclables and exchange them for a cash deposit. Over one month, I collected and recycled thousands of plastic bottles from four families.

If each individual in each household chose to use a reusable bottle rather than a plastic one, there would be a drastic decline in overall plastic pollution.

To Earth’s benefit, we’ve seen individual initiatives as simple as ditching plastic bottles lead to major legislative revisions across the globe. Public opinion is strident and personal action is acknowledged, igniting a movement of political activism and a transformation in legislation.

An individual’s effort to reduce destruction is impactful, both directly and indirectly.

So, in Thailand, despite falling asleep feeling disheartened because of the plastic pollution, I woke up each morning eager as ever, not allowing what I cannot do interfere with what I can do and knowing that any stride made toward protecting the planet is worthwhile. 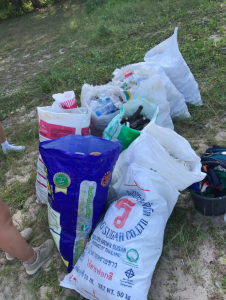