So we found the Sun again. Hooray for May!

Hola amigos, and bienvenidos once again to the GVI Jalova Blog

This month in wonderful Jalova has been a busy one, and I shall try once again to put some it down in words! After the seemingly years of rain we’ve had here, many of us are happy that the sun has come back out. This is good for a number of reasons such as letting our clothes dry (yay), allowing our solar power to charge so interns can power their laptops and staff can do work (boo!) but most importantly so I can work on my tan. The sun has been fully revelled in by some particularly entrepreneurial volunteers who built a 10m long volleyball net so that we can play beach volleyball on our beach! This is great fun and you can check the photos below for some proof of the smiling faces, although in my opinion they have nothing on the women’s team representing Sweden in the Olympics.

In terms of wildlife seen around here, there have been many intriguing sightings mainly brought out due to the rain and then lack of it. I believe they are also all trying to catch some of these beautifully bronzing rays, and I don’t judge them. One such exciting animal we found around base was the Speckled Racer, which is a type of snake in the racer family (duh). It is a truly stunning animal, which darker scales running the length of the body but with turquoise and blue shading between the scales, giving it a shimmery effect. They are also impressively fast, meaning that it was very convenient that it appeared just outside of the staff house so we could safely remove it from base. Obviously only after having a good look at it.

Another great sighting we have had was of the ever-elusive Baird’s Tapir. Picture this; a group of courageous GVI explorers, equipped with the latest Tortuguero-supplied headtorches and bug-spray, stepped gingerly through the sticky night. One foot in front of the other they’d been told, and they keep this in mind as they creep ever-forward into the sweaty, saturated, tropical night. Their leader, Max the Intrepid (that’s me), spies large, lumbering movement up ahead on the path. Fearing the three-syllable name that has inspired religion (JAG-U-AR), he shoots his beam of revealing light into the thick darkness. But low-and-behold, shuffling its way through the leaves was a prehensile upper lip, beady eyes and a rotund body and it revealed itself as the ethereal Baird’s Tapir, seen only a couple times each year. Everyone that was present shared a moment there, staring into the eyes of an incredibly secretive jungle creature, and after a second that seemed to last forever, the gentle-giant vanished into the undergrowth. It has always amazed me the way an animal so large can disappear into the forest, but I guess they are a tad better adapted for life in the rainforest than the human poking it’s light in the bushes looking for it again. Witnessing a wild tapir is an experience that, and I believe I can talk for everyone there, will live for me forever.

Close-Encounters of the Crab Kind

Tapir’s and Speckled Racers aside, I understand that the main feature of these blogs is to hear about the wonderful crabs that have been wandering around camp creating mischief. May did not disappoint in this way, in fact I think that every other month going forward will now disappoint when compared to May. This was because it was the crab mating season (maybe it was mating season, maybe they were just being extra weird) and this meant that they were literally everywhere. You could not walk five meters a 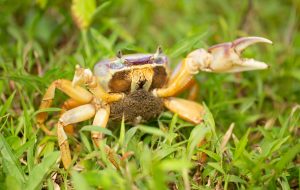 t night around base without kicking one, and when you catch them right they really do get some air! But don’t worry, no crabs were harmed by us, their protective exoskeletons appear to work quite well. Their sheer abundance did cause some other issues however. For example, one week there was this terrible smell emanating from underneath the back of the dormitory, and it was discovered that there were several dead crabs under there, creating a smell. This was highly unpleasant, and had to be dealt with through careful use of a rake. They also developed a particular taste for hanging out in the bathroom and Craig did make a reappearance although this time he brought his friends. I have tried to include some photos of the different locations that I found crabs around base this month, although the photos do not truly represent how unbelievably abundant they actually were. 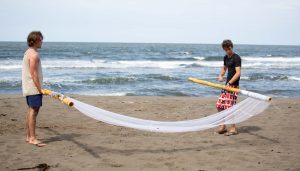 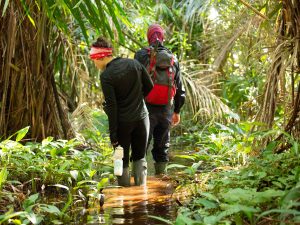 After all the rain, our forest trails were very swampy! Lovely! 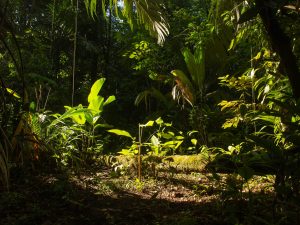