It’s the end of week 4 here in Thailand for DukeEngage, and it has been another fulfilling week of service. We started the week with some tasks to help the Thai navy and their conservation program. As a team, we created 12 recycling receptacles out of repurposed chicken wire that will be placed at the turtle conservation center and beach at the navy base as well as in surrounding national parks. The next day (Tuesday), we participated in a promotional video for the navy’s upcoming triathlon in Phang Nga, the province in which we are based. We woke up bright and early and were bussed to Phuket, where we were met by Thai navy commanders and our navy contact Uncle Jimmy. The navy shut down the Phuket bridge while we were filmed running across it and back, side by side with navy soldiers and other volunteers.  It was definitely a once-in-a-lifetime opportunity that we were able to help out the Thai navy in this way, and we are confident that our participation will encourage community members to take part in the upcoming triathlon. After we returned to Thailife, we had time to present our leadership projects to the entire group and prepare for this week’s leadership project, working with FED, a Burmese school for children in Khao Lak. 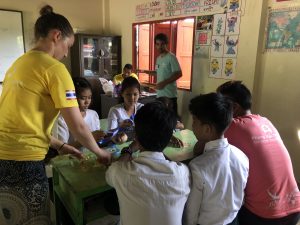 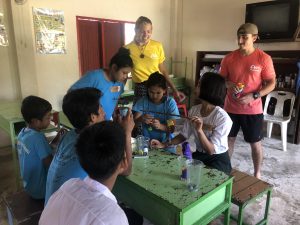 Wednesday, the 12th of June, was the start of our 2 day teach-in at FED. For their leadership project, Olivia, Chloe, Calleigh, Akasha and Brennan organized all the events of the day for 45 students in grades 6-8. The goal was to teach them about environmental conservation topics and encourage conversation in English. Students were split into four groups, each with a Duke leader to guide them. They then went to a series of stations all centered around repurposing trash like cans, bottles, and egg cartons. Metal cans and plastic beads were used to make maracas, egg cartons were used to plant flowers, and plastic bottles were repurposed and redecorated into piggy banks and bird feeders. At the same time, the students learned a ton including how to reuse and recycle, how to identify different bird species, as well as the dangers of environmental threats like plastic pollution and deforestation.  We were very happy to see them practicing their English, engaging in the activities, and forming special bonds with their group leaders. 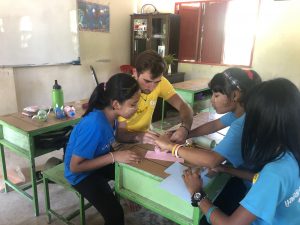 After getting to know the students and teaching them vital environmental conservation information, we wanted to spend the last 2 hours channeling our energy into FUN! We started out the afternoon with a big game of capture the flag with recyclable bottles as the flags. 20 kids vs. 20 kids running full speed, protecting their flags, and saving their “frozen” teammates left massive smiles on every single person’s face at the FED school. It was so amazing to see all the kids work as a team to strategize and capture the flags!

Following capture the flag, we split up into various activities including a game of soccer, a fun parachute activity, coloring, and bracelet-making! These were great games to allow ourselves to play with smaller groups and get to know each other more before we departed! Overall, we loved working with the FED students and felt that the last 2 hours of fun and games were the cherry on top of our experience working with the children! 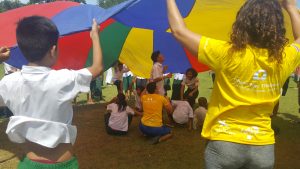 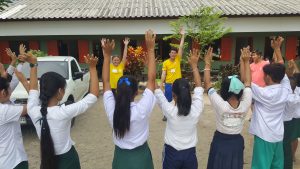 After our afternoon at the English camp at the FED school, we received a debrief from Bob, one of the school’s coordinators. Bob taught us about the culture at FED and about the context of the children and families who are involved with the school. We noticed that some of the children had yellowish-white paint on their faces, and Bob told us that it was for sun protection and beauty purposes of Burmese culture. The Burmese constitute Thailand’s largest migrant population. We learned that many of the children in the school move around a lot due to their family’s migrant status. The school places children in grades by levels of mastery, not by age, and because of this, many of the grades have a variety of ages and maturity levels. We loved getting to know the children and learning about their cultures and their background.  We would love to go back to the school and interact with all the new friends we made!