Field Staff Member Luke Tavener has taken it upon himself to create a master guide to Buddhism in Laos for volunteers. It is not designed as a complete guide to Buddhism but rather to help answer many of the common questions volunteers have when coming to Laos. Here is part three of his guide. One of the three projects volunteers can choose to join in Luang Prabang is ‘Volunteering with Buddhist Novice Monks’. Below provides a unique insight in to the reasons males become Novice Monks and the rules they then live by, complied through in depth conversation with Novice and ex-Novice students in Luang Prabang. 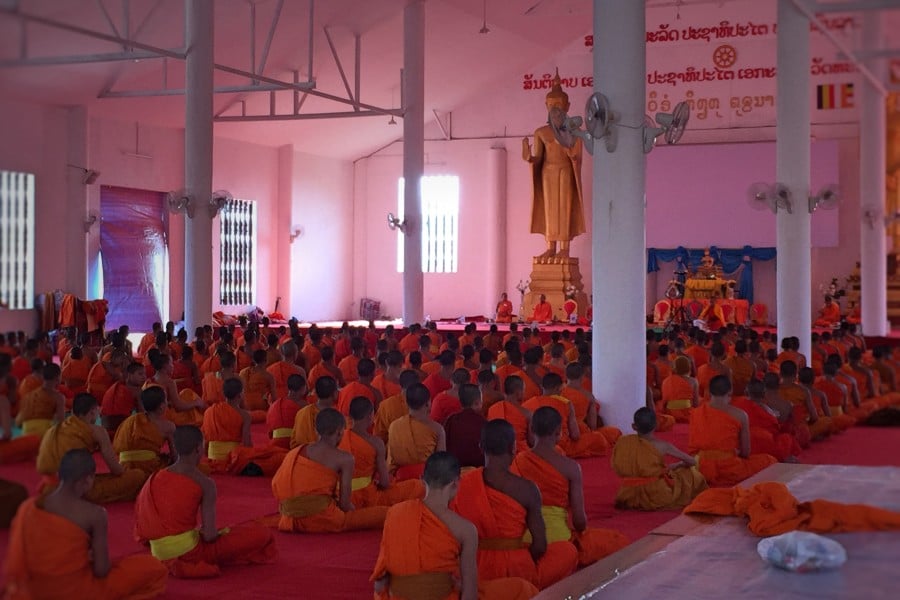 The earliest age Novices can enter the temple, through choice or through the decision of a guardian, is as young as ten or eleven. Depending on the temple’s Abbot, it is often expected that a small donation towards the temple is made. From this point onwards if a Novice wishes to remain a part of the temple they’re not allowed to leave the temple unless granted permission from their Abbot.

Upon entering the temple, the relevant Abbot or the most senior monk within that temple grants the novice precepts (rules) to live by and with every full and half moon these precepts must be renewed, as to extend one’s novice-hood. Originally Novices had to live by an incredibly high amount of precepts, however over time these have been condensed down to just ten for better understanding and convenience. These ten precepts are as follows:

The first five precepts are generally considered to be the most important and breaking one is punishable by law and can lead to extradition from the temple. Upon breaking any of the latter five results in a warning and then possible expulsion upon repeated offence. Each temple also has the power to enact and maintain their own certain rules and rules can also differ from place to place inside Laos. For example, in Vang Vieng Novices are allowed to ride bicycles, however as Luang Prabang is classified as a UNESCO World Heritage Site Abbots are very strict on the rules and this is not allowed. 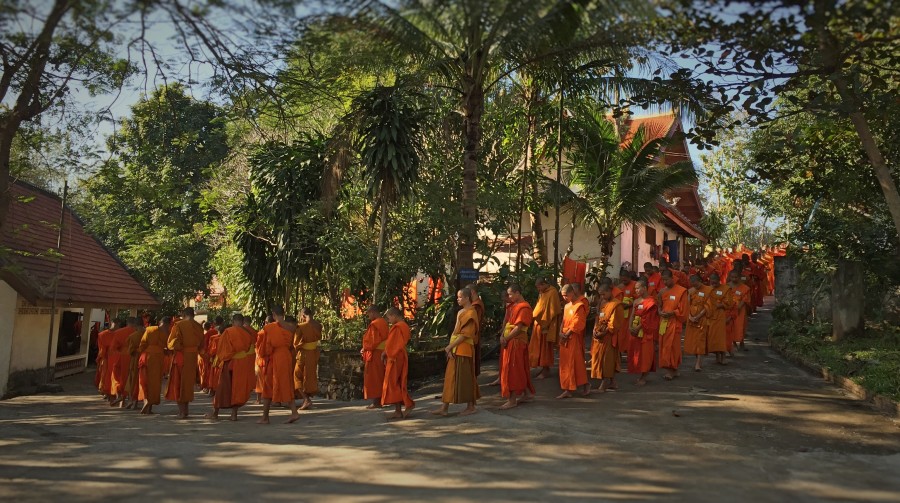 Laos is very proud of their Buddhist roots and one way they attempt to differentiate themselves from other countries is through the uniformity of Novice and Monk attire. The colour orange was chosen to represent the flame of the heart and each Novice’s robes are received through random donations. The robes often belonged to ex-novices and have been passed down through generations. Outsiders donate these robes to the temple and each one is attached with a random number which is then handed out to each Novice. The robe giver is considered the equivalent of an adopted parent and they are often referred to as ‘Step-Mother’ and/or ‘Step-Father’ and as they grow up Novice’s will have many step-mothers and step-fathers.

It is also customary for novices to only cover their left shoulder as to clearly differentiate between monks who have to cover both their shoulders. However, this does not mean that all orange robed Buddhists covering both shoulders are monks as some choose to cover themselves when they’re cold.

Lao Buddhists also shave their heads and eyebrows each new moon as to rid oneself of the vanity attached to hair and to keep the uniformity between them all. It is believed that the shaving of eyebrows came into practise after imposters shaved their heads and donned orange robes to steal food from the temples. It then came into power that all Novices and Monks had to begin shaving their eyebrows to demonstrate true dedication to Buddhism and as a way to weed out the imposters. 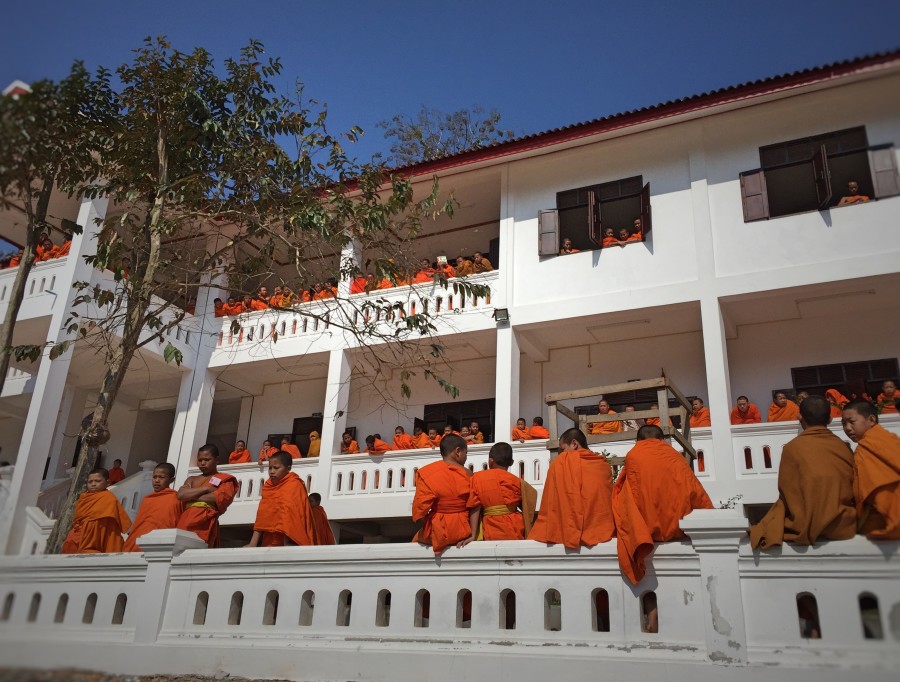 Every Novice attends Monk school, where they study a plethora of subjects; English, Mathematics, Biology, Physics, Chemistry, Lao Language, Lao History and World History, Civics (Economics and Law), Geography, Dharma and Pali/Sanskrit. Pali/Sanskrit is an ancient language, in which all chanting is conducted. These lessons consist of basic reading and translation lessons, however, the language is extremely hard to grasp resulting in the majority of Novices having little knowledge of what is being chanted.

Novices have the opportunity to transfer to different temples with the Abbot’s permission and they typically stay in the temple until the age of 18 or 19. After the leaving ceremony is completed, the Novice is once again a lay person. At this stage Novices, or specifically ex-Novices, then integrate in to the community as a lay person, many choosing to pursue further education or seek employment. It is not until the age of 20 that ex-Novices have the opportunity to reenter the temple and continue on as Monk.

For more information looking at the lives of Buddhist Monks click the following links to read our previous blog post series, ‘FAQ Answered by Novices’:

Ex-Novice and Novice Monks from various temples in Luang Prabang