A typical weekday volunteering at GVI Luang Prabang meant that I left the guesthouse at 7, greeted the tuktuk driver at his pitch at the top of the lane, enjoyed breakfast at the Bamboo Restaurant, and returned in time to climb aboard the Abbot’s mini van at 8 for the journey to Wat Pha O. We would teach English to the Novices there, and then get back in time for a quick meeting about the plan for the next day’s lesson, before grabbing some lunch in time to walk to the library to teach an English extension class to some advanced Novice students.  My final class of the day was a kid’s class at Xayadeth College, which, on one memorable occasion involved a coupe of live frogs.  The day would end with dinner at Bamboo with fellow volunteers followed by lesson planning and chatting round the table at the guesthouse.

However, the only things that were actually given were that I greeted the tuk tuk driver and taught English!

Some mornings the “Lao time” service (the practice whereby the first person served had finished their meal by the time the last person received their food!)  at Bamboo meant that I got my breakfast to go and ate it for lunch.  Occasionally, the Abbot’s minivan and driver were off on a different errand so by the time a taxi was hastily called we were late for class.  On the way, my teaching partner and I went through the teaching plan deciding which bits of it to ditch.  The Novices at the library mentioned Shakespeare in a class one day and so the plan for the following couple of days was gaily abandoned and instead we looked at a speech from Macbeth and discussed the various everyday phrases that have come from the plays.  The sudden announcement of the start of Vipasana (the annual meditation retreat for the Monks and Novices) meant that many classes were cancelled and volunteer power was instead spread throughout Luang Prabang at other venues.

Yes, it was busy and hard work; teaching, getting from college to library to Wat, fitting in lesson planning, locating resources, hastily revising my own English grammar but by staying flexible and open and drawing on my own resources it was enormous fun and, in fact, life affirming.  I had no relevant teaching experience and certainly never thought I would be in the position of miming riding a bicycle to a roomful of around 45 8-10 year old novices.  Yes, I was nervous but the training and reassurance that the GVI staff provided gave us the confidence we needed – in fact for the first few days I was more concerned that my Sinh would fall round my ankles than about the teaching. 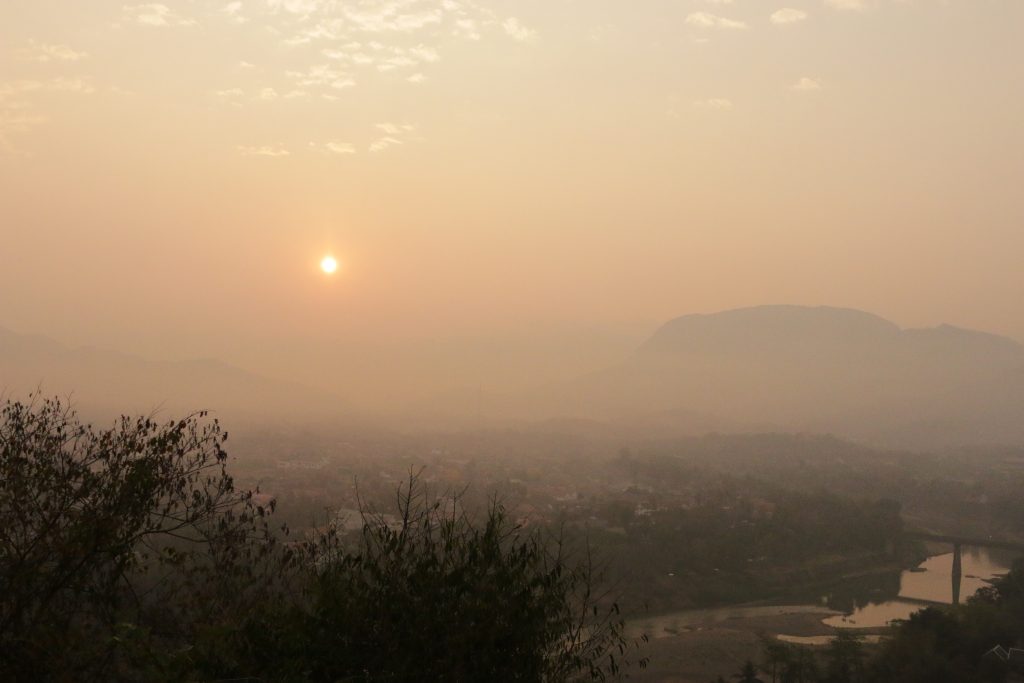 The silver lining of things not always going according to plan was that I got the opportunity, along with other volunteers, to attend a session of chanting and meditation at Vipasana – a real privilege and something I will remember for a very long time.   We met a wide range of students, not only novices but also students wanting to improve their English in order to study abroad to become engineers, doctors and tour guides in their own country, to work in the hospitality industry with a view to owning their own guesthouse.  One novice has aspirations of working at the UN one day.  Most of these students attended the lessons in their own time – many were at college or university from 8 am till 11.30, English class from 12 – 1 followed by an evening (or even a night) shift at a job to support themselves and their families.  I was humbled by their dedication and every one of the students’ thirst for knowledge, both in the temples and colleges, to learn both English and about the world beyond their own home country.

Teaching on the GVI Luang Prabang program has been one of the most enriching, rewarding, challenging and uplifting experiences of my life.  The support and care received from the local GVI staff, the camaraderie of the volunteers (some of whom I am sure will be friends for life) and the enthusiasm of the students, as well as the beauty and energy of Luang Prabang itself, made it very special.  I would encourage anybody who wants a complete change from their normal life, a few challenges, and a lot of laughs to join the programme.