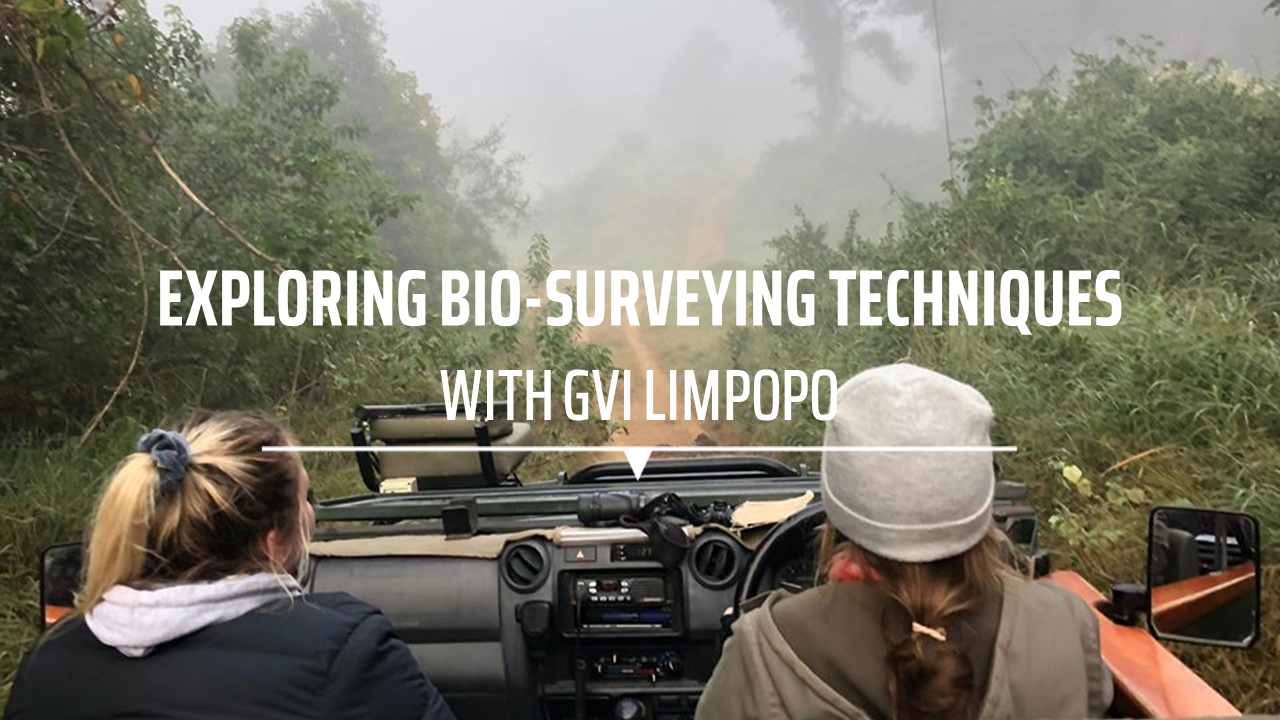 Biological surveys are a quintessential tool in wildlife conservation. They can help us to not only understand ecological processes within specific study areas, but also, if done well, allow other areas to replicate these surveys and collect large amounts of data and information that can be analysed and assist with the management and protection of wildlife.

Here in South Africa, numerous bio-surveying techniques have been adopted by research teams in both nationally run protected areas (like National Parks), as well as privately owned and operated protected areas (such as private game reserves). As part of the wildlife conservation internship with GVI Limpopo, we expose learners to these different types of bio-surveys and how they can especially impact the management of species on the reserve we operate on. These techniques are not unique to South Africa and are easily replicated for research being conducted in various locations all around the globe. Learning these skills, therefore, exposes interns to the best protocols of conduct so that they can utilise these techniques anywhere they go in the world. They are assessed on each different skill and technique, with assessments, reports, and lists to complete before being awarded with a Bio-surveying Technique certificate at the end of their internship. Karongwe Private Game Reserve (KPGR) is a fully fenced private reserve located in the Limpopo Province of South Africa, where GVI Limpopo have called home for almost 20 years. Our responsibilities as the research team on the reserve are to monitor and collect data on the feeding ecology of large predators; their prey preference and kill frequency, inter- and intra-specific competition of large predators through the analysis of their spatial utilisation and prey preferences, spatial movements and ranges of large predators and megaherbivores, sex and age ratios and spatial utilisation of prey species, identification kit maintenance for all large predators, elephants and rhino, and elephant population monitoring.

The data we collect is used primarily by the Karongwe Reserve Management team to assist with reserve management decisions based on scientific data. GVI Limpopo also work closely with the Endangered Wildlife Trust (EWT) as one of their partners assisting with their Carnivore Conservation Programme (CCP), specifically for the cheetah meta-population management programme. As GVI Limpopo closely monitor the cheetahs on Karongwe, the data collected through various bio-surveying techniques contributes to a national pool that allows for a better understanding of wild cheetah behaviour on fenced reserves, thereby improving their management and growth as a result. All participants engage in the day-to-day monitoring of the focus species, being that of the Big 5 (elephant, rhino, buffalo, leopard and lion), as well as cheetah, hyena and other rare game (e.g. caracal, serval, pangolin, etc.) during the twice daily game drives. Whether the GVI general research drive or the lodge game drives find the animals, all this data is collected by participants with the help of staff relaying messages sent over the vehicle’s radio. This data includes the usual metadata (date, time, weather, etc.) as well as the location, composition (i.e. 1 male, herd, etc.), and any additional behavioural or kill data available (data sheet pictured below). This general monitoring of focus species over the last 19 years has resulted in a huge set of historical data that can not only be analysed to discover spatial utilisation patterns and home/core ranges of specific individuals or species, but can also be overlaid with other species movement patterns, vegetation and even climatic seasons to examine trends.

Game drives for interns do not end there though. We also conduct bird and invertebrate surveys that contribute towards citizen science initiatives (identification and distribution maps in particular), prickly pear distribution (an invasive alien plant species that we also remove when possible), mapping of the road quality to assist reserve management with road maintenance, soil sampling to create a soil map of the reserve, monitoring bird of prey nests (in particular Wahlberg’s Eagle) for the EWT’s Bird of Prey Programme, and of course cheetah kill utilisation surveys. This last one in particular is very enjoyable, as participants assist staff in collecting rather interesting data from the cheetahs on a kill (time spent while feeding over a 5-minute period, as well as carcass utilisation). We hope to one day analyse this kill utilisation data of our cheetahs and compare that to cheetahs on a reserve with little competition from other predators.

As for the equipment we use, interns especially are taught how to correctly use different types of scientific surveying equipment that are often used internationally. The first weapon in our arsenal is the VHF telemetry device, used to help us track our focus predators to ensure accurate and consistent monitoring. VHF transmitters are fitted on the lion and cheetah and are therefore first on the priority list for the general research drives. The correct use of other smaller devices including a GPS, range finder, and compass are also part of the learning process and an important skill to have as a field researcher. Camera traps are a non-invasive method used to monitor wildlife and have revolutionized research for conservation, enabling scientists to collect photographic evidence of species in the wild with little expense, relative ease, and minimal disturbance to wildlife. They have become a crucial element of wildlife monitoring, adding significant value to work conducted by researchers and conservationists alike. Their non-invasive format has also allowed for the observation of events, behaviours or associations not easily or often witnessed in person. This is especially true for elusive and endangered species that are not easily or often seen. A large portion of the internship is dedicated to the setting up and maintenance of camera traps, as well as sorting and even analysing the data collected from them to produce reports on select stations during their time with us. Not only must interns master the use of surveying equipment and understand how to best monitor and collect data on focus species and environment aspects, but they are also taught additional yet important elements of field research, such as how to identify tracks, signs, trees, invertebrates, birds and mammals, how to identify large predators from photos (such as hyenas and leopards through spot/rosette patterns), and even write reports on selected taxonomic families found on the reserve and critique scientific literature relevant to our research operations.

With so many people opting for meaningful careers in conservation and sustainability, our program offers the unique opportunity to learn and gain experience working first-hand on these important aspects of field research and conservation, while also making a positive impact in areas that need it the most. It also gives them that extra element to help stand out in an often overwhelming and competitive career field that is wildlife conservation.