1 888 653 6028   /   617 674 2105   Apply Now
Announcement
TRAVEL UPDATE: We're open! Where can I go? and answers to your questions about COVID-19
Zaytoen
Domingo
Zaytoen Domingo is a content writer and editor based in Cape Town, South Africa. She is currently enrolled in the Masters program in English at the University of the Western Cape. After graduating with an Honours Degree in English and Creative Writing, Zaytoen completed a skills-development program for writers and became an alum of the GVI Writing Academy.
Marine Conservation Responsible Travel Travel Volunteering Wildlife Conservation
0 Likes
Share
Facebook
LinkedIn
Twitter

Environmental impact: Pollution is not always a “dirty” word When we think of pollution, we often think of smog, oil spills and litter-clogged waterways. But pollution doesn’t always take the form of the well-publicised, “dirty” substances humans have introduced to the landscape.

Pollution is directly or indirectly targeted in ten out of the 17 United Nations Sustainable Development Goals (UN SDGs). For example, UN SDG 11: Sustainable Cities and Communities alerts us that as of 2016, 90% of people living in urban environments were breathing air considered an unsafe level.

But it is not only the gas-pumping factories of our big cities that have an environmental impact.

Pollution, by definition, is any contaminant entering an environment upon which it will have an adverse effect.

Take windows, for example. These are pieces of remarkable technology that many of us take for granted. But they have a negative ecological impact on the animal kingdom – birds in particular.

Our modern way of life has introduced many new items and experiences to the environment, and wildlife are struggling to sustain the only way they know.

Let’s explore a few of the environmental changes that aren’t obvious sources of pollution, but are having a big impact on wildlife. 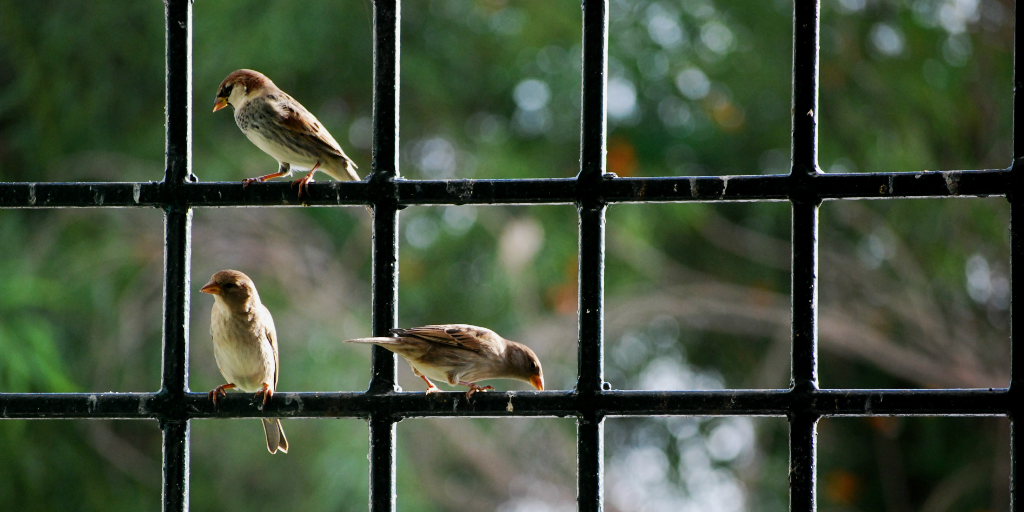 Original photo by Sami M’rad is licensed under CC BY-SA 2.0.

Many of us have experienced a bird tapping on a window trying to figure out how to get through to eat the moth flitting around in the light fitting.  A trapped insect can look like an injured insect, offering the opportunity for an easy meal.

And some of us may have experienced the horrible sound of a bird flying at full speed into the glass. It’s not always clear why birds connect with windows, or the ecological impact they have on the species that do, because some species can be more affected than others.

When a window reflects the scenery behind the bird, it can bring about the illusion that there isn’t anything in the way of their flight path. Equally confusing is when light shines all the way through the building from one window to another. These characteristics also magnify the effects of light pollution at night.

Some animals, such as cetaceans and other primates, can identify themselves in a reflection. However, other species have varying neurological structures and experience senses in vastly different ways from our own. They are therefore unable to make the connection. So when a bird sees its reflection, it thinks it is an intruder trying to claim a stake on its territory, placing the bird under unnecessary stress.

Noise pollution: Could you turn that down, please? 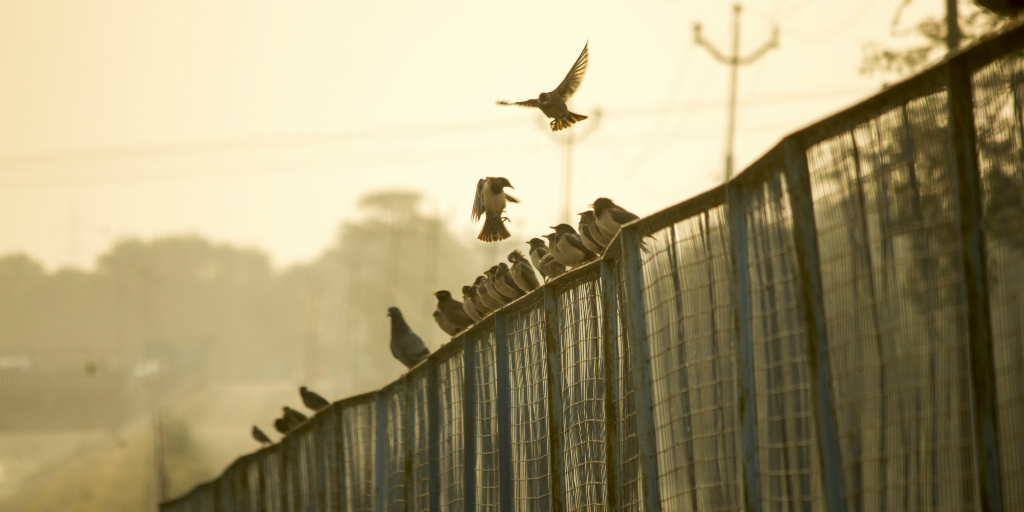 Original photo by Jinali Parikh is licensed under CC BY-SA 2.0.

While the birds of our neighbourhoods are having a visual identity crisis, they are also having to fight to be heard.

Birdsong is an essential communication tool. It helps them map out territories, find a date and declare a predator in their midst. But with ever-increasing, noisy urban environments, birds are struggling to hear each other.

If you are an early bird you have surely borne witness to the orchestral magic and complexity of the morning melody.

Within the languages of the human race, various cultures place different inflections on words to gauge intent. It’s the same with birdsong.

External influences have great social impact in the bird world. And if the song is being drowned out by busy roads and the rumblings of industrial areas, the intent of the singer can be misconstrued.

Studies have shown that some birds are changing the pitch of their song to better convey their message. It is still unclear what social impact this will have on the birds in the long term, or any wider ecological impact the environmental change will influence.

From birds in our backyards to whales in the deepest ocean, animals all across our planet are trying to survive in a world full of new and louder noises.

Cetaceans experience the world as a group. They are social animals with a remarkable ability to sense the world around them using echolocation. But our increasingly busy shipping lanes, along with oil and gas exploration in the arctic, are interfering with this ability to communicate with each other. 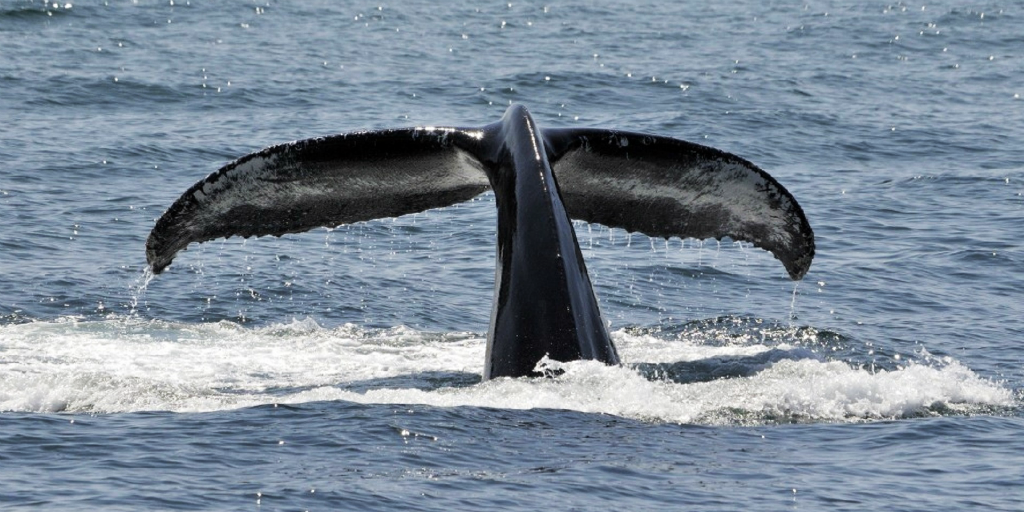 Original photo by skeeze from Pixabay is licenced under CC BY-SA 2.0.

Noise travels faster and longer in water compared to air. This is one of the reasons we are told not to tap on fish tanks.

UN SDG 14: Life Under Water states that since the beginning of the industrial revolution, ocean acidity levels have increased by 26%. Acidity changes the ability of water molecules to absorb sound. With increased acidity and traffic, the ocean is only going to get noisier.

Studies show that the noise from overhead powerboats is affecting behaviour change in hermit crabs. The distraction means they take longer to retract into their shells, leaving them vulnerable to predators lurking nearby.

You can imagine how terrifying overhead noise can be for these tiny creatures, but around Victoria Falls even the giants of our land are running scared.

Scientists predict that the amount of helicopter traffic in the area will influence the local elephant herds, resulting in them leaving the area. Nobody is sure of the environmental impact that may have on the new and existing ecosystems.

But where will they go? Not even the species that have evolved to migrate can do so as they once did.

New barriers: Who moved the waterhole? 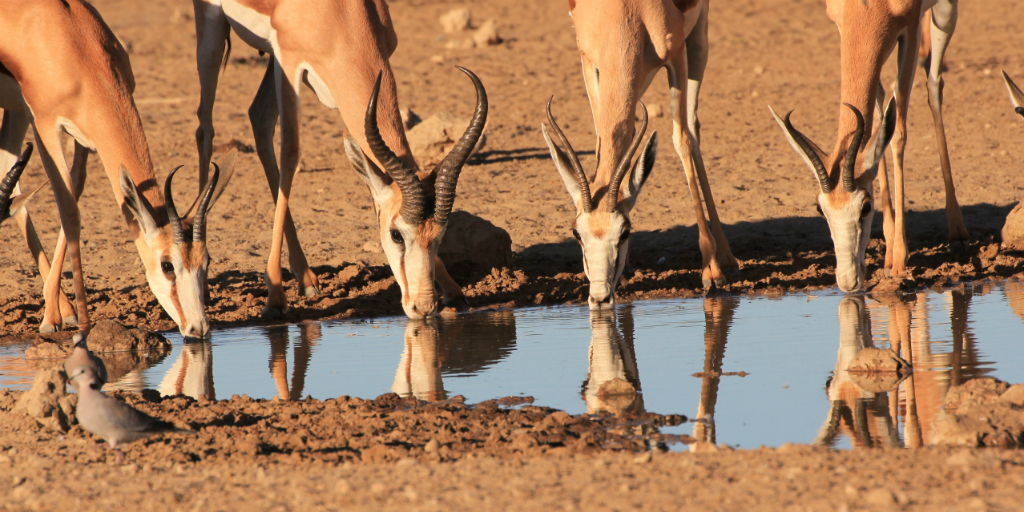 Original photo by  Gary Simons is licensed under CC BY-SA 2.0.

Mass migration of large mammals is a famous part of the southern African landscape. But along with some of these species, their way of life is also in danger of extinction.

Each season, as the greening of savannah grasses shifts across vast plains, so do millions of wildebeest, zebra, and a variety of antelope. Ungulates perfectly adapted to life on the grassy plains have thrived thanks to their ability to move great distances.

Unfortunately, the only barriers wildlife know are those created by mother nature.

The vast fences of the great agricultural industry of domesticated hoofed animals prevent the spectacle thousands of tourists flock to see.

In Australia, the driest continent on Earth, large mobs of kangaroos and emus move across the landscape as droughts grip and break. It’s not quite the calibre of the great migrations of the African plains, but this movement is also at risk with the increase of agriculture, urbanisation, and huge fences. 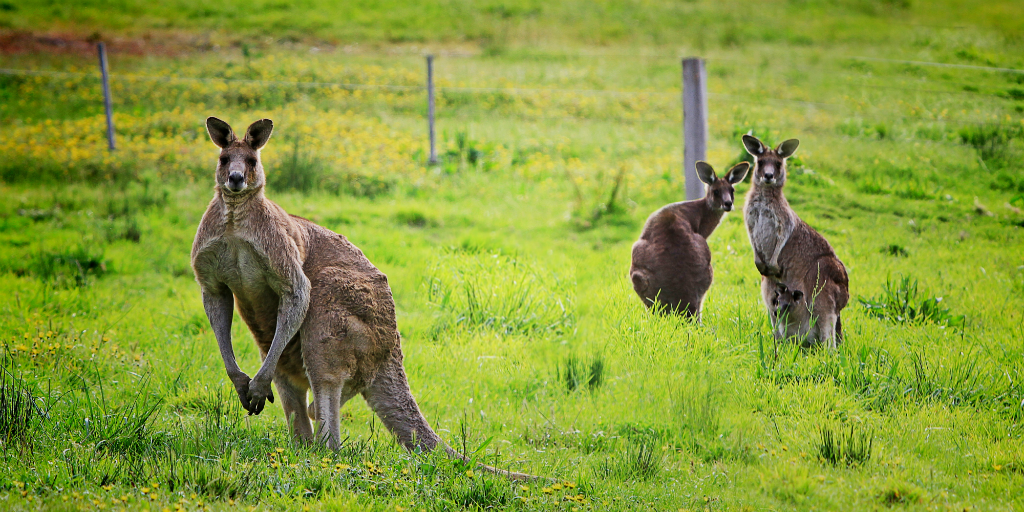 Original photo by Holger Detje is licensed under CC BY-SA 2.0.

Agriculture is one of the largest industries in many countries and fencing plays a critical role in the success of the industry. But this is another example of how our way of life has an environmental impact.

In restricting animals, we interrupt their interaction with various ecosystems over the seasons. The large-scale ecological change stemming from this is still to be fully understood.

Fences aren’t the only environmental change affecting the animals that travel enormous distances across the planet, as nature intended. Many winged species make intercontinental migrations, almost the length of the Earth, to breeding and feeding grounds.

They often rely on resource stops along the way to achieve the feat, including ponds and wetlands for wading birds, or milkweed patches for monarch butterflies.

As human infrastructure spreads across the continents, these resources are diminishing. UN SDG 6: Clean Water and Sanitation calls to action better management of freshwater ecosystems and sanitation facilities to reduce water scarcity and improve water quality. This will improve the lives of millions of people and the wildlife that rely on the resource.

Biologists have only just begun to unravel the mysteries of these extraordinary migrations, making it more difficult to predict ecosystem change.

Light pollution: Walk towards the light 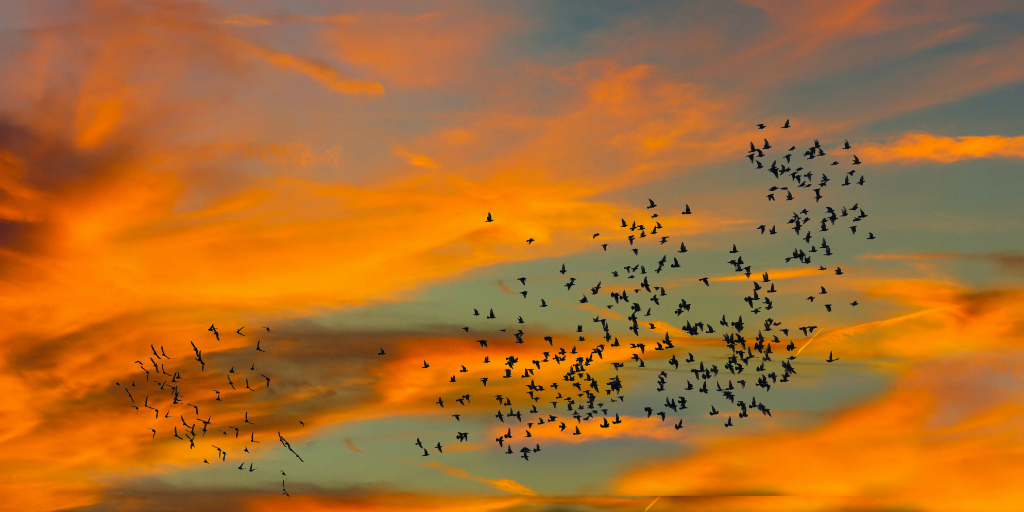 Original photo by Gerhard Gellinger is licensed under CC BY-SA 2.0.

In the case of the nocturnal migrant, the magnolia warbler, artificial light pollution has the biggest environmental impact on the species.

City lights are attracting the birds into the concrete jungles, affecting their navigational abilities and putting them at risk of crashing into buildings. Many migrating birds make their journeys at night and some investigations find tall buildings are in the way of generational flight paths.

Artificial light pollution is also leading other animals astray. Lighting from coastal infrastructure is attracting adult and hatchling turtles who navigate towards the moon. Even though turtles hatch at night they face a gauntlet of hungry mouths and obstacles just to make it across the sand. 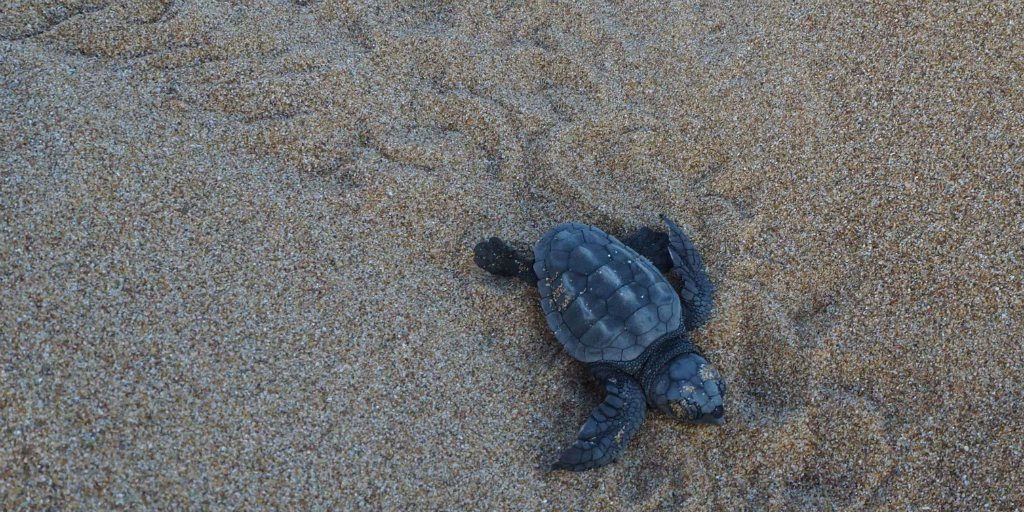 Approximately only one hatchling in a thousand will make it to maturity to have babies of their own. If the hatchlings are following a red herring along the beach instead of towards the sea, their chance of survival is reduced again.

Adult turtles are not immune to light pollution, either. They’re graceful in the water, but on land mobility is difficult. The further the turtle travels on the beach, the greater the chance of becoming immobilised by obstacles or difficult terrain. Coastal developers are encouraged to cover or switch off their lighting at night to reduce the impact of light pollution. If we can consider the effect our energy usage has on the wildlife around us while considering UN SDG 7: Affordable and Clean Energy, we can solve more problems than anticipated.

Circadian rhythm is essential to the body working efficiently. The effects of artificial light on the human body are well documented, but our way of life is also messing with the circadian rhythms of wildlife. Nocturnal animals are the greatest affected.

Red light, however, does not interfere with the natural behaviour of nocturnal animals. Biologists conducting nocturnal surveys have long been aware of this. In fact, the GVI staff and volunteers based at Jalova in Costa Rica only use the red light of head torches while conducting turtle surveys along the beaches of Tortuguero National Park. 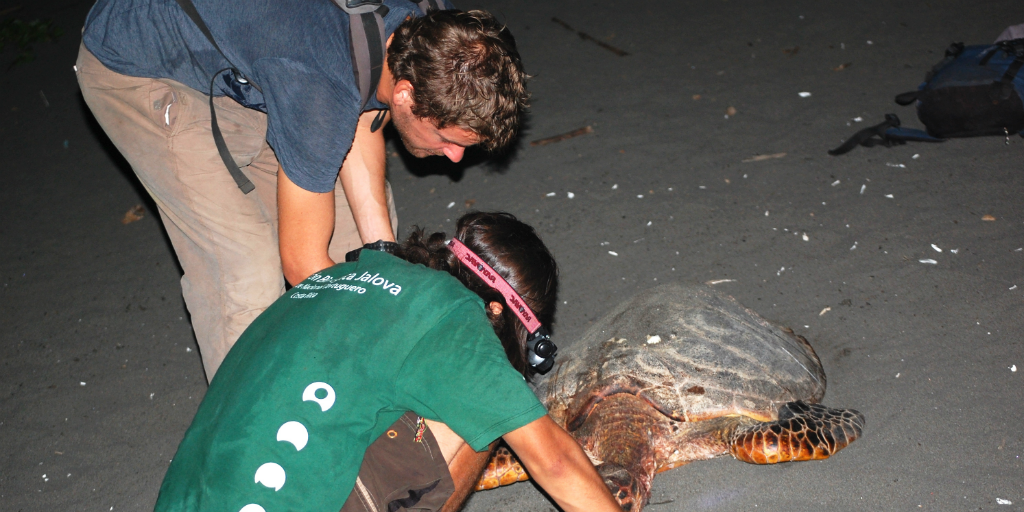 Small changes in our behaviour and increased awareness can bring about positive ecological change. We are often considerate of our human neighbours. So a shift in thought, extending our ideas of community to include the wildlife we share our neighbourhood with, could bring about the greatest positive environmental impact.

Want to learn more? Join us in the field on a conservation program to gain hands-on experience with a positive environmental impact. Or check out our blog for more articles on the sustainability and conservation efforts of our teams across the planet.