Cambodia’s uptake of sport has seen a great increase in the past 30 years, and there are a range of different popular activities that plenty of people take part in to keep fit. If you are near the Mekong river, you will see that people love to exercise along the stretch as they can get a cooling breeze from across the river. Walking is very popular, and I have even seen people wearing rain ponchos on very hot days as they power walk up and down, which I presume is to try and increase the benefits of the walking but who knows!! 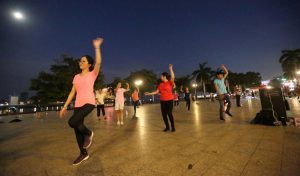 Another popular form of exercise that you will see along the riverside in towns is Zumba! If you are an early riser, you can see in the sunrise at 5am as you dance to the electronic music being blasted out. The music is the equivalent to 5 cups of coffee!! For obvious reasons the afternoon Zumba sessions tend to be a lot more popular. You tend to have a regular group or 2, and depending on the group the music may be quite upbeat or a little more traditional. On occasions you will see a big group of students taking part, and their routines are always brilliant to watch or dance along to. At only 50p a session, it is well worth a try! 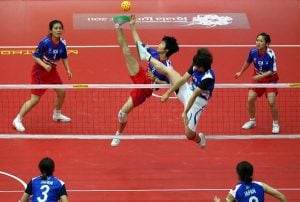 Once you start to notice them, you will see nets all over Cambodia which may lead you to think volleyball is a popular sport. Instead the sport played is called Sepak Takraw, also known as Kick Volleyball. It is a sport that mixes football and volleyball, and is native to Southeast Asia. It’s well known in countries like Thailand, Cambodia, Malaysia , Laos and Indonesia, and the rules only let players use their feet, knees , chest and head to touch the ball. If you have the flexibility to have a go you definitely should! 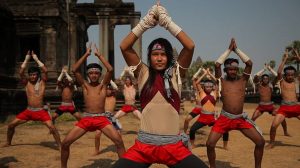 Bokator is an ancient martial art from Cambodia. Bokator was developed in the Khmer Empire’s capital city of Angkor, which thrived in Cambodia between the ninth and 15th centuries. Warriors invented it for use in combat and self-defense and carvings of bokator fights can be found in abundance on the walls of Angkor Wat. It is similar to Muay Thai, but if you enjoy martial arts you should learn about why Bokator is unique to Cambodia. 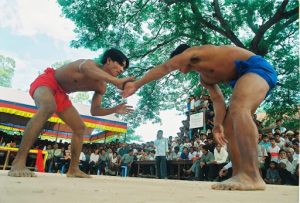 Did you know that Baok Cham Bab is a folk wrestling style from Cambodia. It is depicted on the bas-reliefs of certain temples and has been practiced as far back as the Angkor period. In Khmer wrestling, the dancing is as important as the wrestling, where wrestlers perform pre-match ritual dancing before the match in which the wrestlers dance and move to the music. Perhaps if Zumba was a bit too much dancing for you, you could try Baok Cham Bab instead! There are so many incredible things to do whilst in Cambodia, and I hope you manage to get involved in at least one of their unique sports during a visit to the country too!